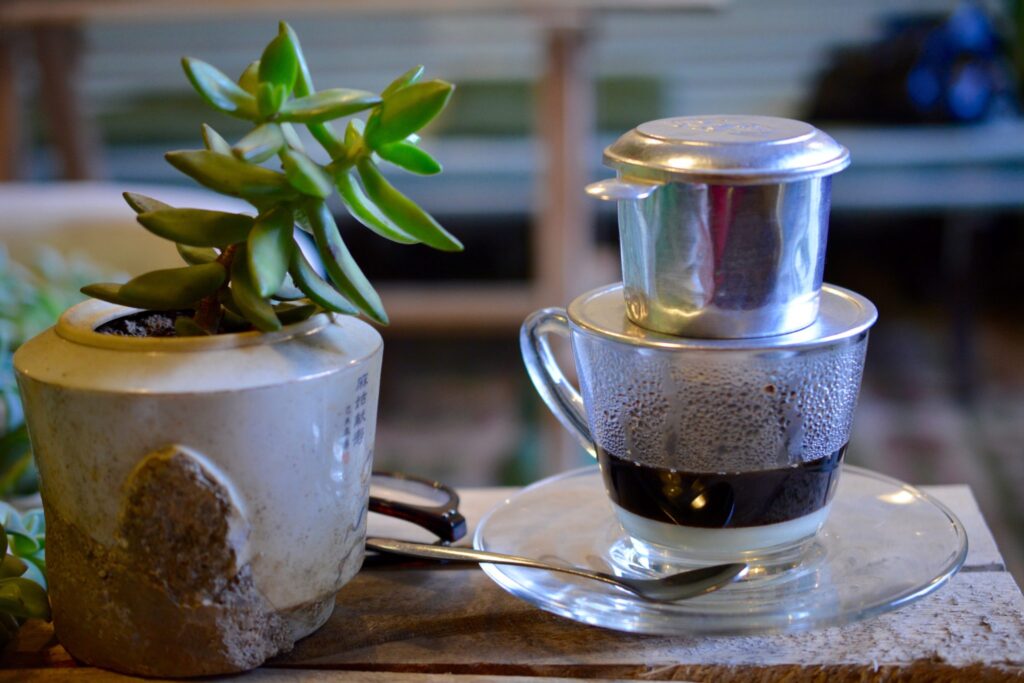 In December 2012, I landed in Ho Chi Minh City, my aim this year was to visit and understand the coffee production in Vietnam in search of Arabica.

Vietnam is the 2nd biggest coffee producer in the world after Brazil with an output of 95 percent Robusta and only 5 percent being Arabica.

When I left the UK , my point of contact was Max Copeskate, a coffee buyer working for Dakman in Vietnam developing the Arabica sector of the business.

This was a first time for me to travel with a commodity coffee company and it was a great opportunity to witness the procedures involved in selecting and buying commodity coffee.

I was aware that the Speciality coffee market was only starting here on a very small scale, and my aim was to be able to find the people involved, so after spending a few days with Max I carried on my trip searching.

Max and I organised to meet in Dalat where I spent 3 days traveling the region visiting Arabica plantations and milling stations.

Dalat looks like a cross between Vietnam and the French Alps.  Many of its hotels and houses are built in a European/ French style. The city spreads across a series of pine-covered hills, with a small lake in the centre, making for some lovely scenery quite different from the rest of Vietnam. Temperatures are pleasantly warm by day, and quite cool at night, down to perhaps 10 degrees Celsius. Dalat’s high altitude (1500-2000 m) and fertile landscape make it one of Vietnam’s premier agricultural areas, producing varieties of fruits, vegetables, tea, coffee and flowers that don’t grow in the lowlands.

In markets as far north as Hanoi and Hai Phong, vegetable and flower vendors will tout their “made in Dalat” produce. 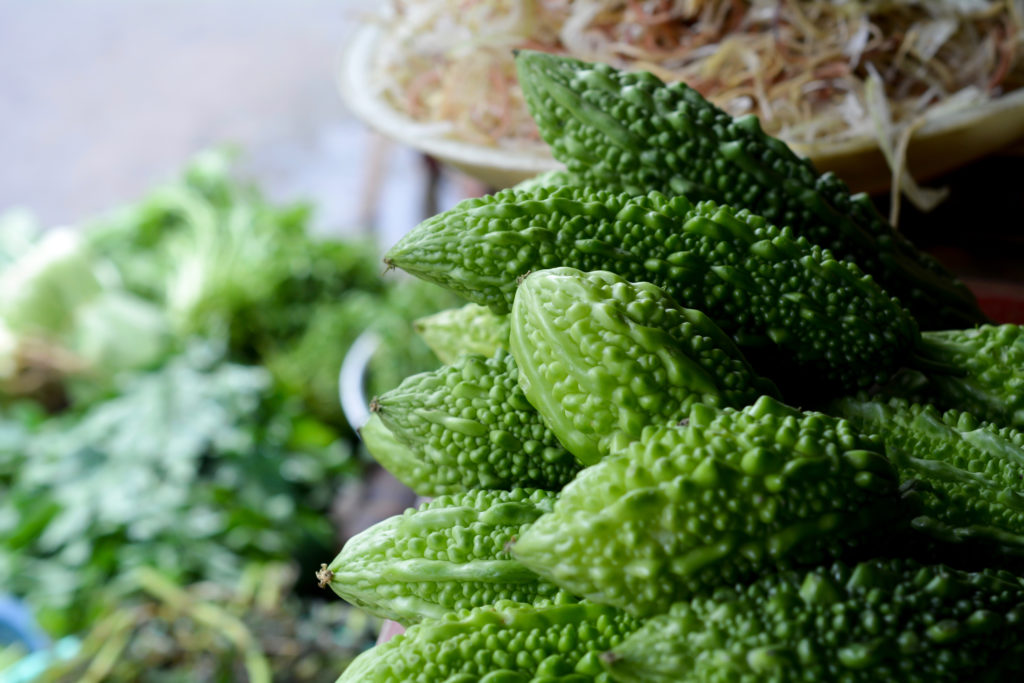 We first of all went on the field where a group of pickers were harvesting, with an incredible view from the valley wearing a hat protecting their faces from the sun. At Speciality coffee farms the pickers will go back many times picking coffee throughout the harvesting season, making sure to pick only the ripest fruits in order to process a sweet and flavourful cup of coffee. Here the pickers were stripping all the branches, collecting green, yellow and red cherries, to be transported, processed and then sold for export.

The commodity coffee market doesn’t allow the farmers to do a thorough picking, time and money here is a priority. 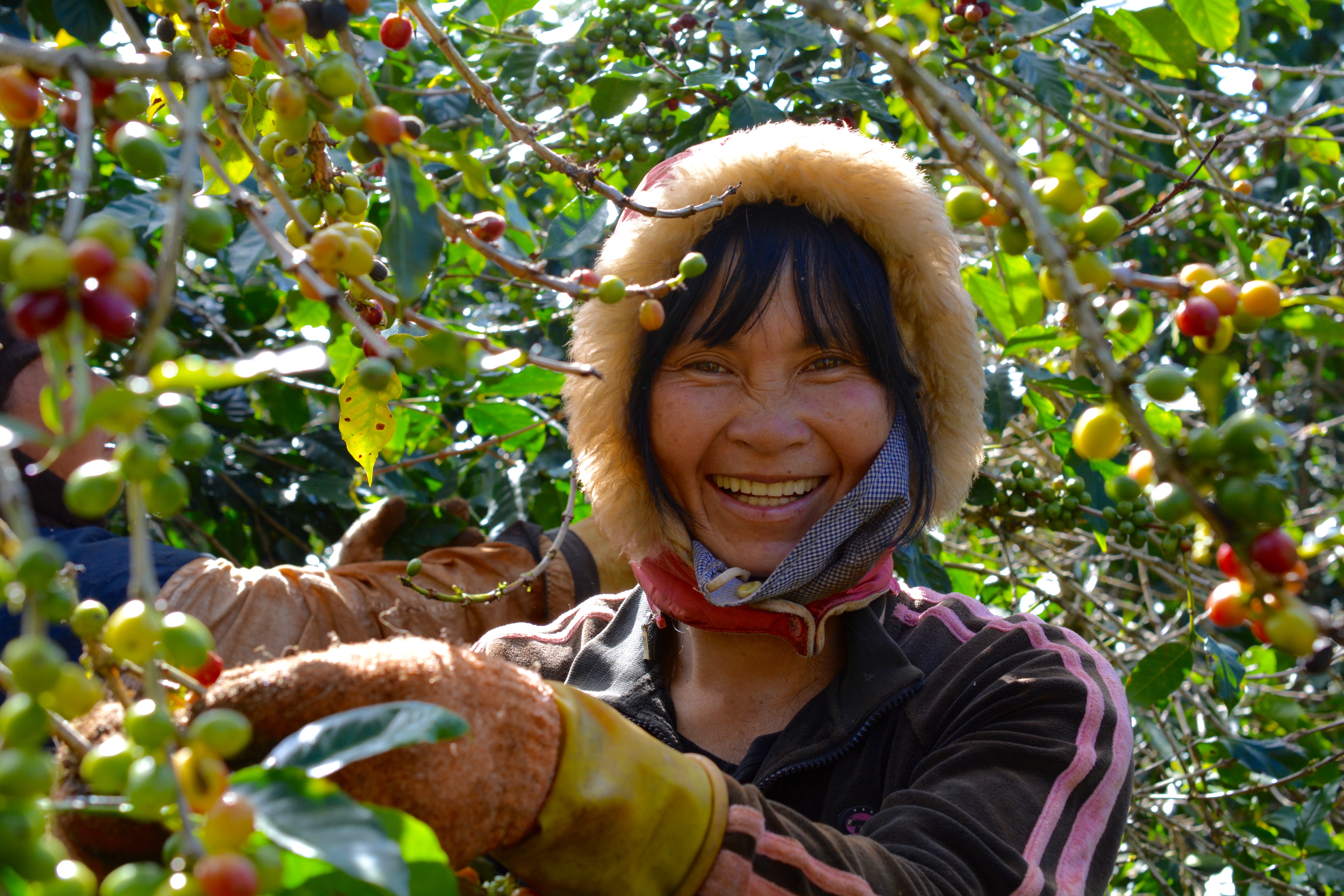 The main coffee species in Vietnam is Catimor, its a cross between Timor coffee (resistant to rust) and Caturra coffee. It was created in Portugal in 1959. Maturation is early and production is very high with yields equal to or greater than the yield of other commercial coffee varietals. It is strong and adapts well to lower regions between 2,000-3,000 feet with annual rainfall over 3,000 mm. Also is very productive and robust, but can have problems at either very high or very low altitudes. At low altitudes there is almost no difference in cup quality between Catimor and the other commercial coffee varietals, but at elevations greater than 4,000 feet Bourbon, Caturra, and Catuai have a better cup quality.

As I carried on walking throughout the plantation I spotted a lady picking cherries from a Yellow Bourbon coffee tree. This coffee variety derived its name from the Island of Bourbon, currently known as Reunion Island, located off the eastern coast of Madagascar. The bean size of Bourbon is on the smaller end of the scale while its leaves are broad and verdantly green. Bourbon cherry can mature into red, yellow and orange colors depending on the particular cultivar.This coffee seed is known for its complex acidity and tremendous balance. 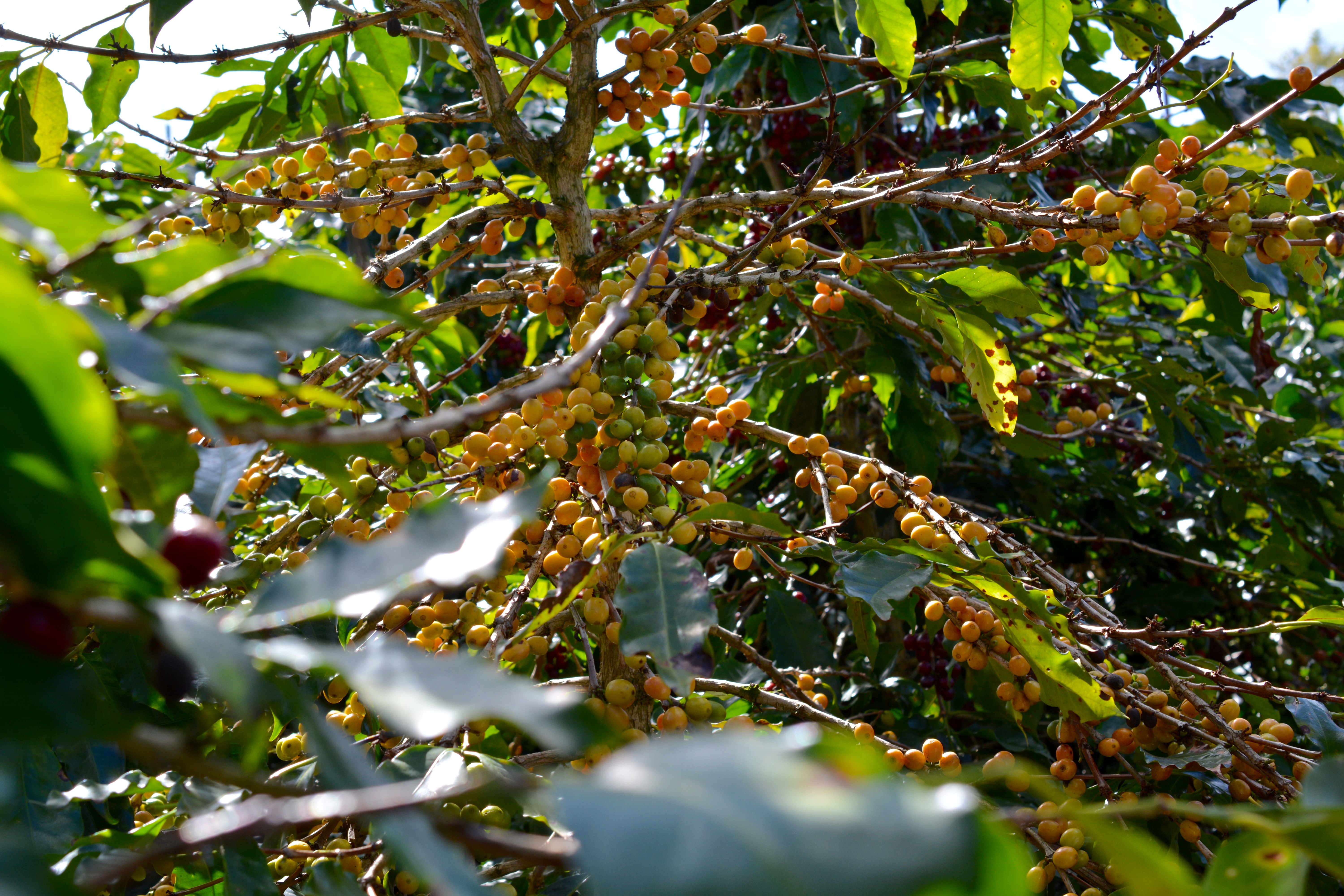 We continued our trip to a milling station where the coffee was being processed and sold. 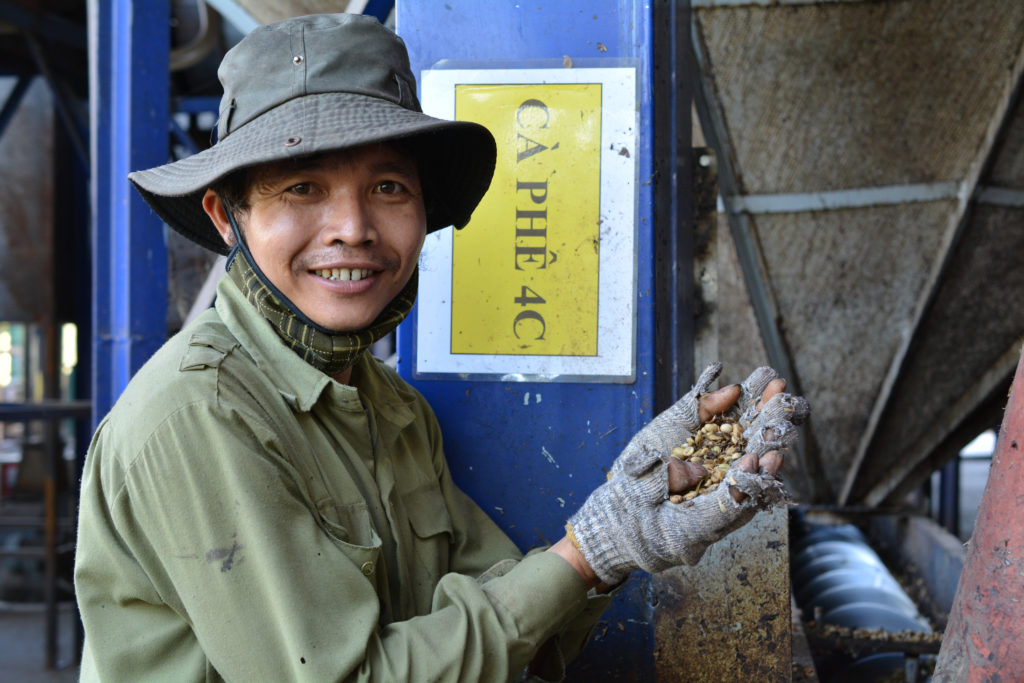 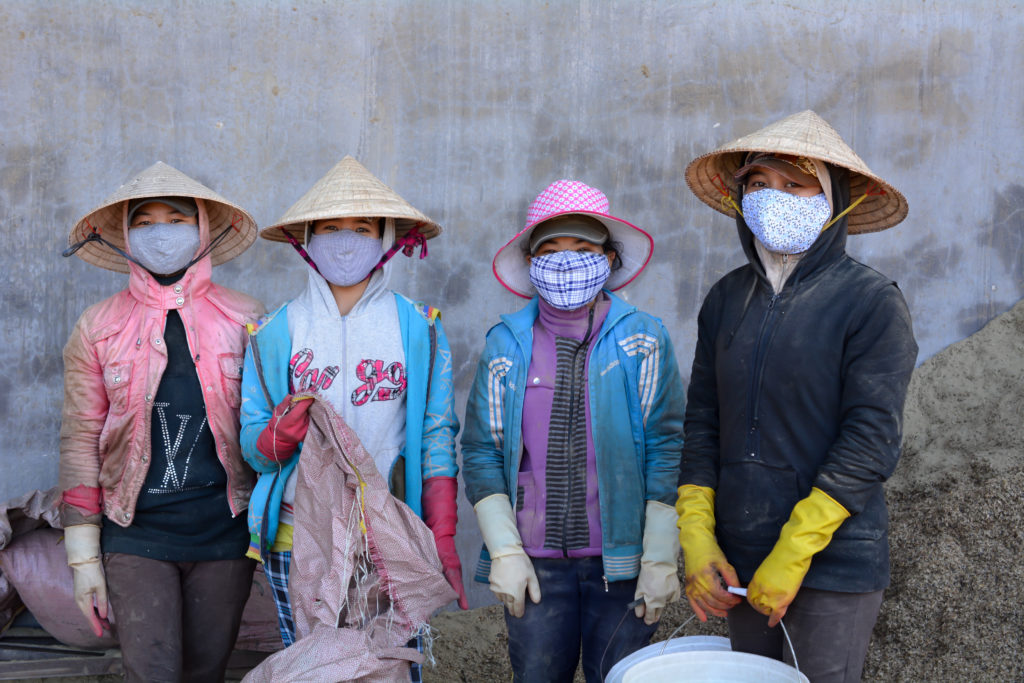 Max will look at the equipment and storing conditions. Then he examines the coffee quality including moisture content and defects percentage. 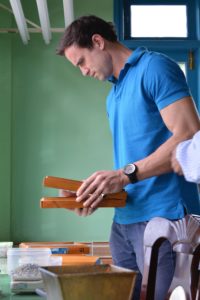 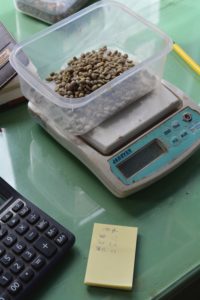 The coffee will be cupped and a sample will be sent to head office in order to approve with the quality required and price before closing contract. 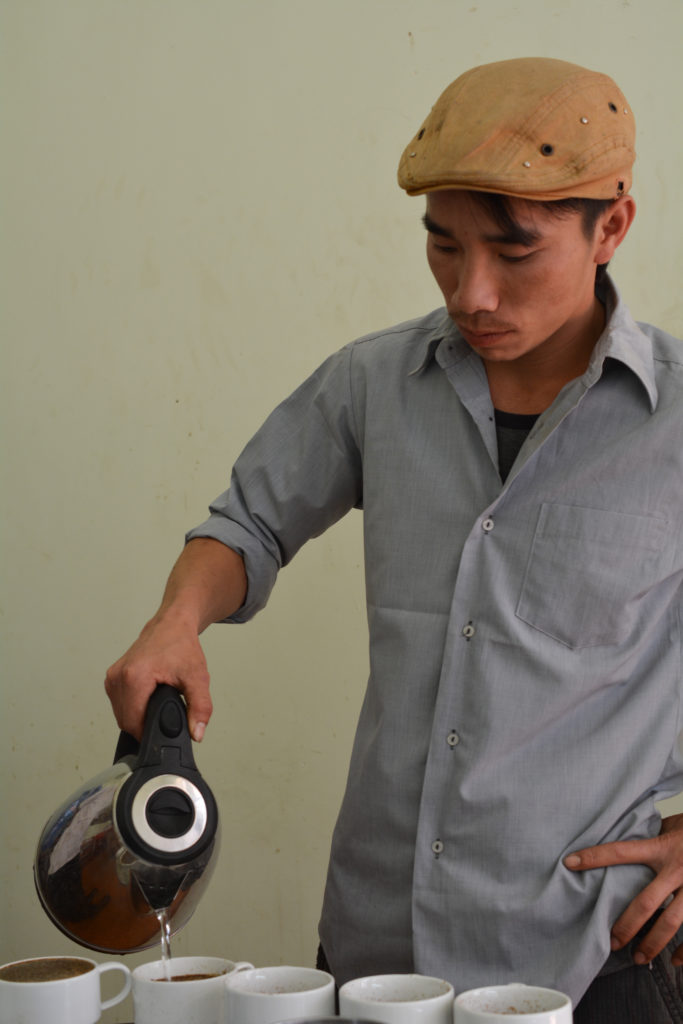 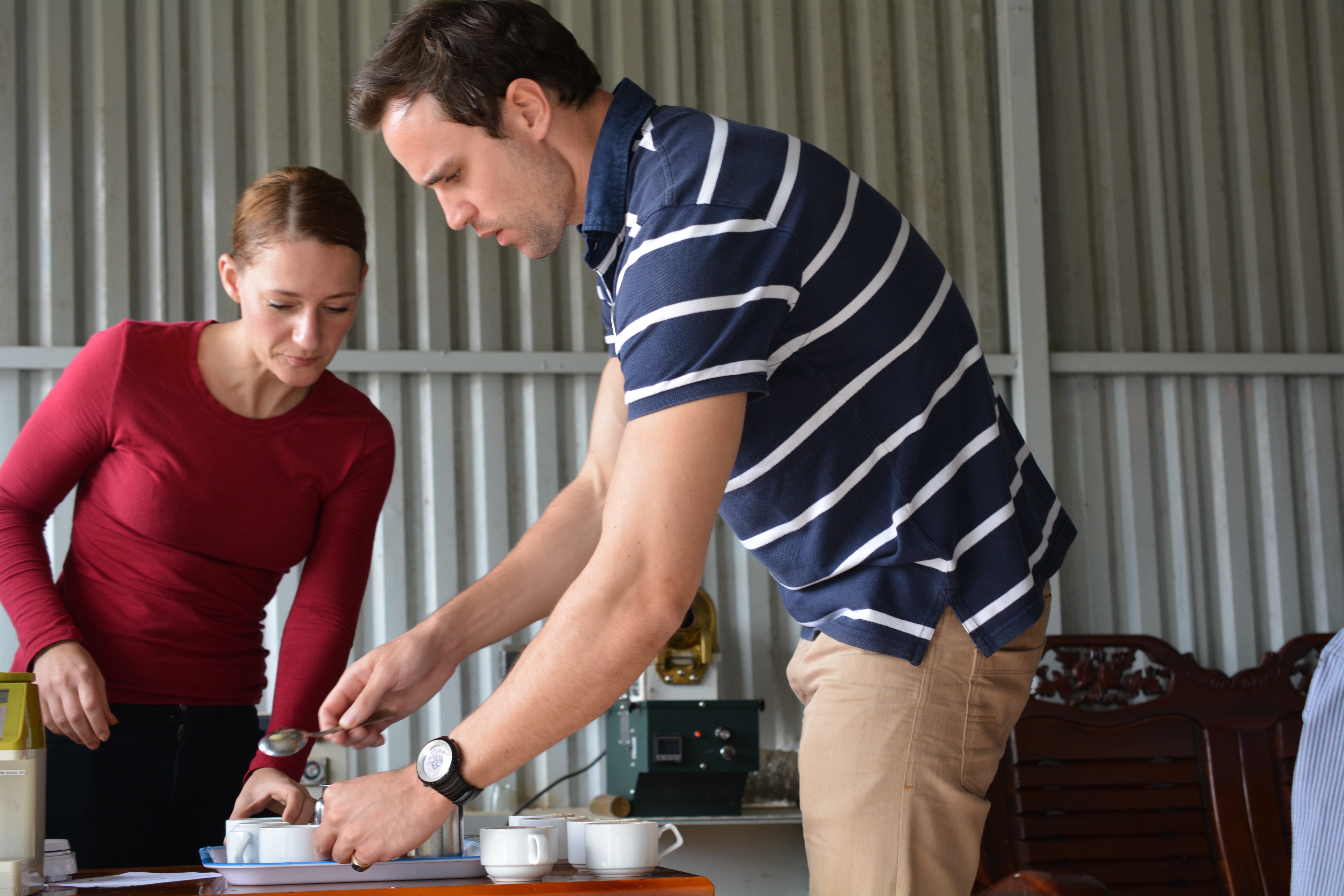 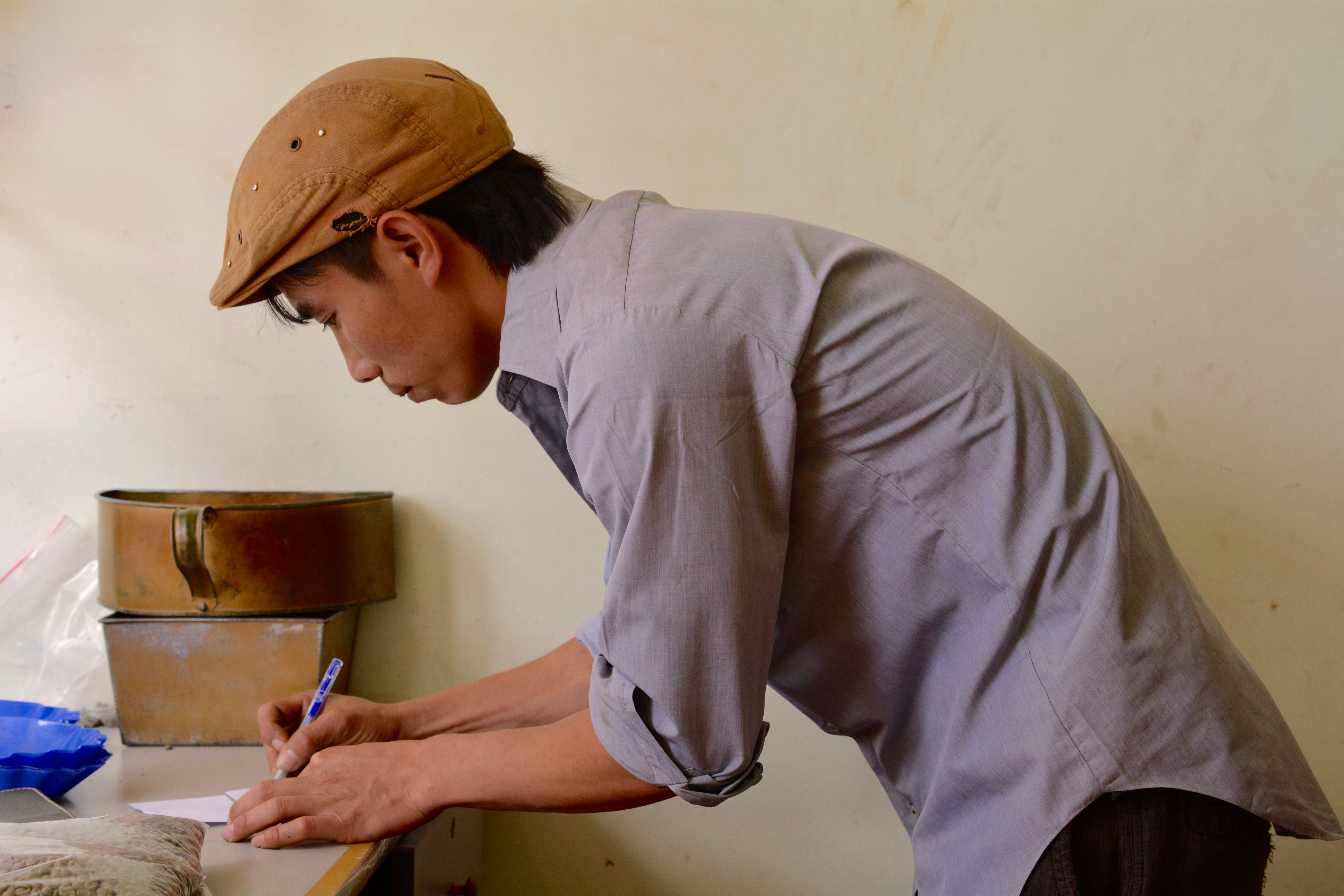 The Commodity market works with ‘the future’, the future is a price that the buyer and the processor will agree on in order to secure the price of the coffee in the current market value.

Let’s say the buyer owns a coffee import company and he needs to buy coffee to make his resale to roasters. Every business day, the price of coffee goes up and down. He wants to buy coffee for the lowest price possible so he can make the most profit when he sells his finished product. But he realises that the price of coffee today might be very different than it is a year from now. So he enters into a ‘futures contract’ with a farmer to buy his coffee at a specific price on a certain future date.

The farmer needs to make money too, so he’s not going to agree on a price that’s way below the current market value. So the buyer will agree to a fair price to ensure that both of them will be happy with the transaction in a year. It won’t be the highest or the lowest price, but neither one of them will get stung by drastic market fluctuations.  It is also explained here

As my journey continued I heard that a small group of people were working very hard to promote the speciality coffee market in Vietnam. I was very much looking forward to meeting them and to learn more about it. First I met Cana Little and Michael Gomez Wood from an organisation called Filanthrope. Cana and Michael have set up a non-profit charity currently working directly with indigenous coffee farmers and their communities within India, Indonesia, Laos, and Vietnam. They work to realign the value paid and received, for specialty coffee on a global scale, in order to alleviate poverty within indigenous, tribal farming communities.

Cana and Michael are focusing their time on teaching and informing farmers in the area of picking and processing and using organic fertilisers . The pickers will only harvest the red cherries and will come back many times during the harvesting season picking the ripened fruits. The processing methods will also be done meticulously, all of these points will give the farmers a chance to produce a quality coffee and sell it at a premium price.

Michael also roasts the coffee from a different farm that he will be in direct connection with. 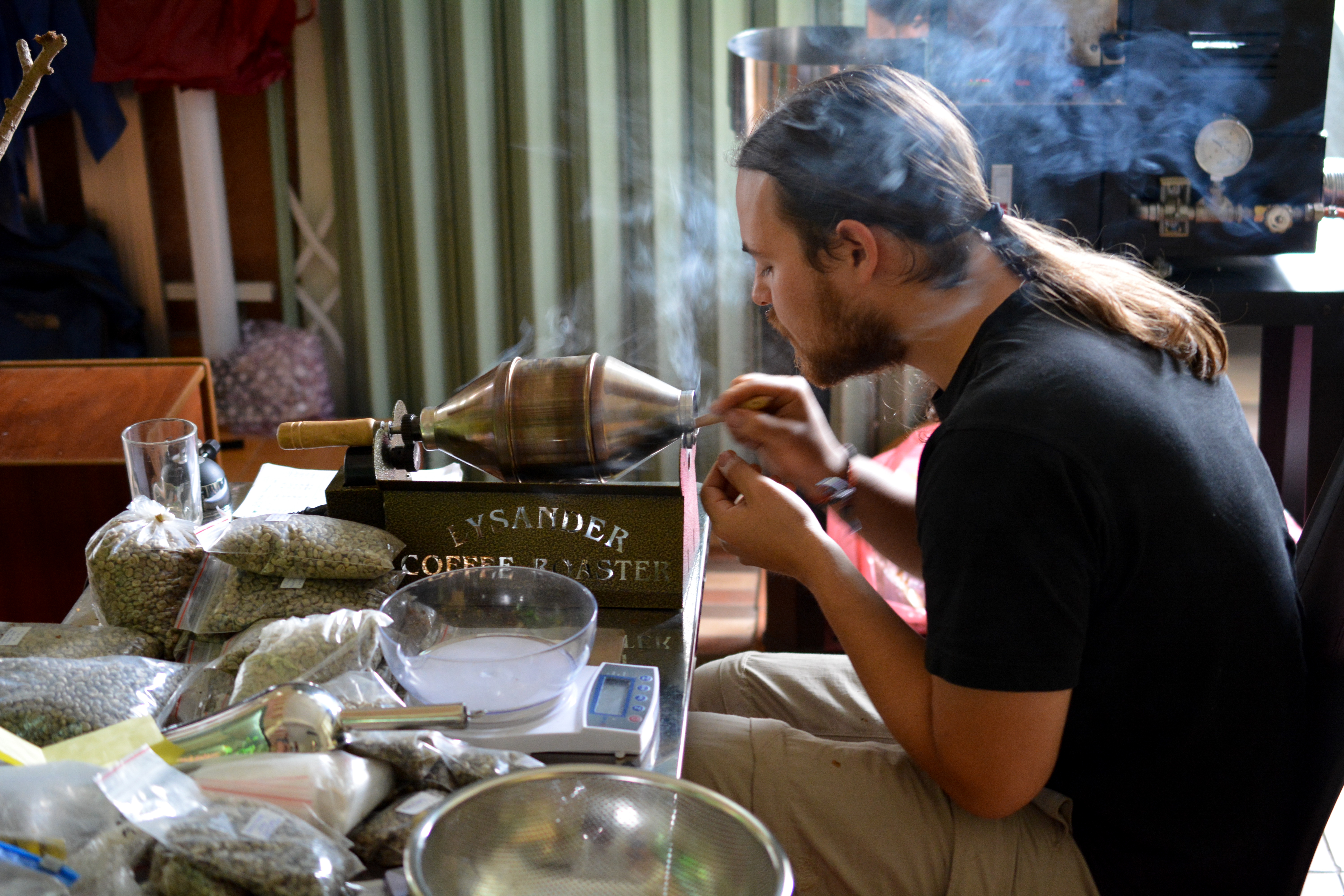 Cana and Michael introduced me to Joshua Guikema & RoLan CoLieng who own a family run cooperative which is at high altitude, it is called Hot Springs Coffee.

The coffee bean production is an endeavour by Joshua Guikema & RoLan CoLieng, to preserve the cultural heritage of the montagnard tribes people and improve ecological sustainability for the long term livelihood of the coffee farming community.

Here is their web page: http://www.hotspringscoffee.moonfruit.com 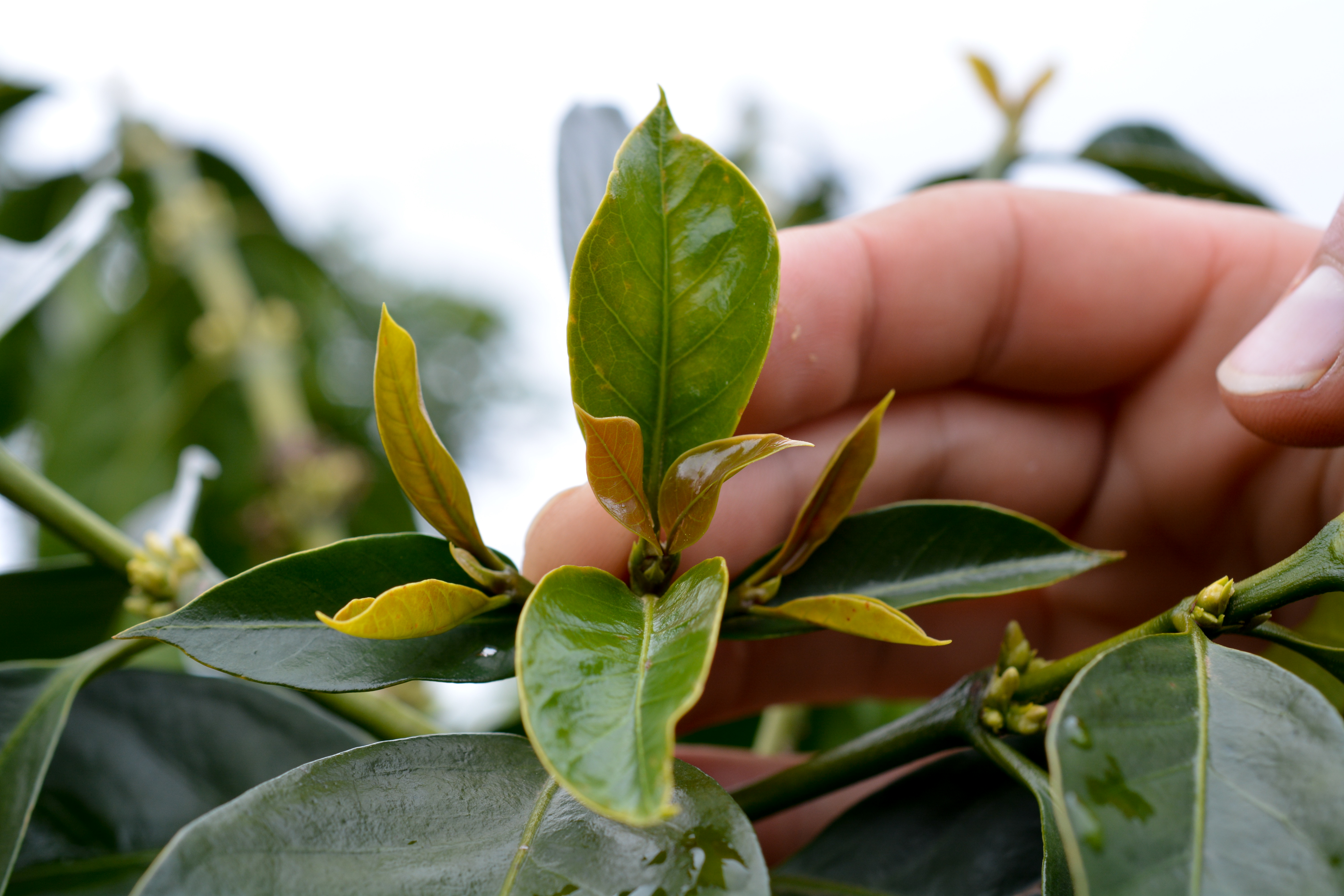 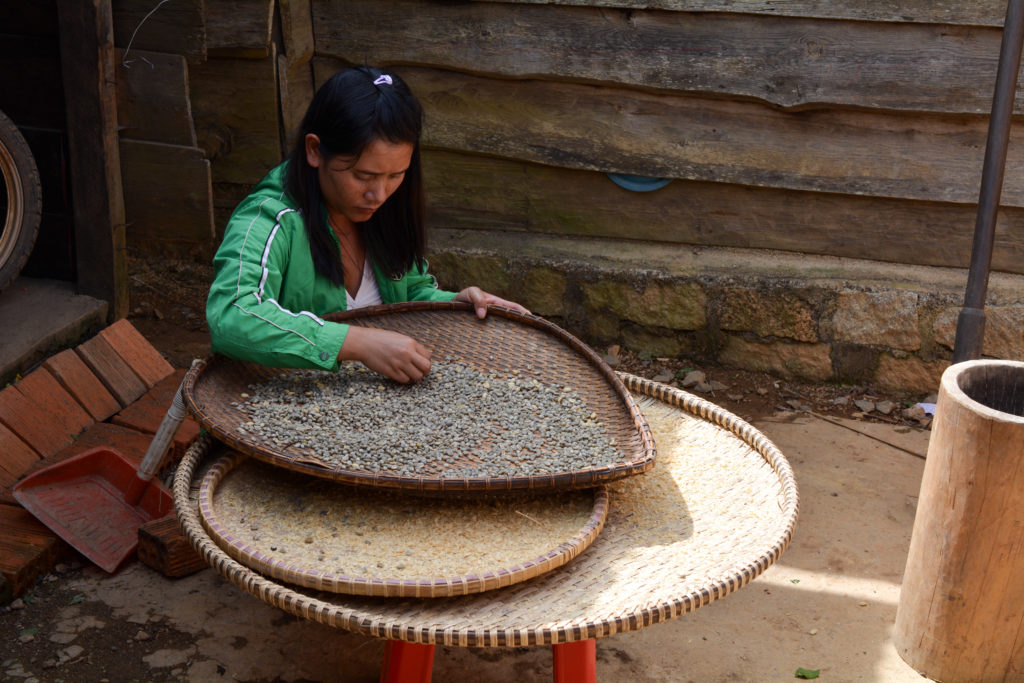 The carefully picked coffee is dried on raised beds. 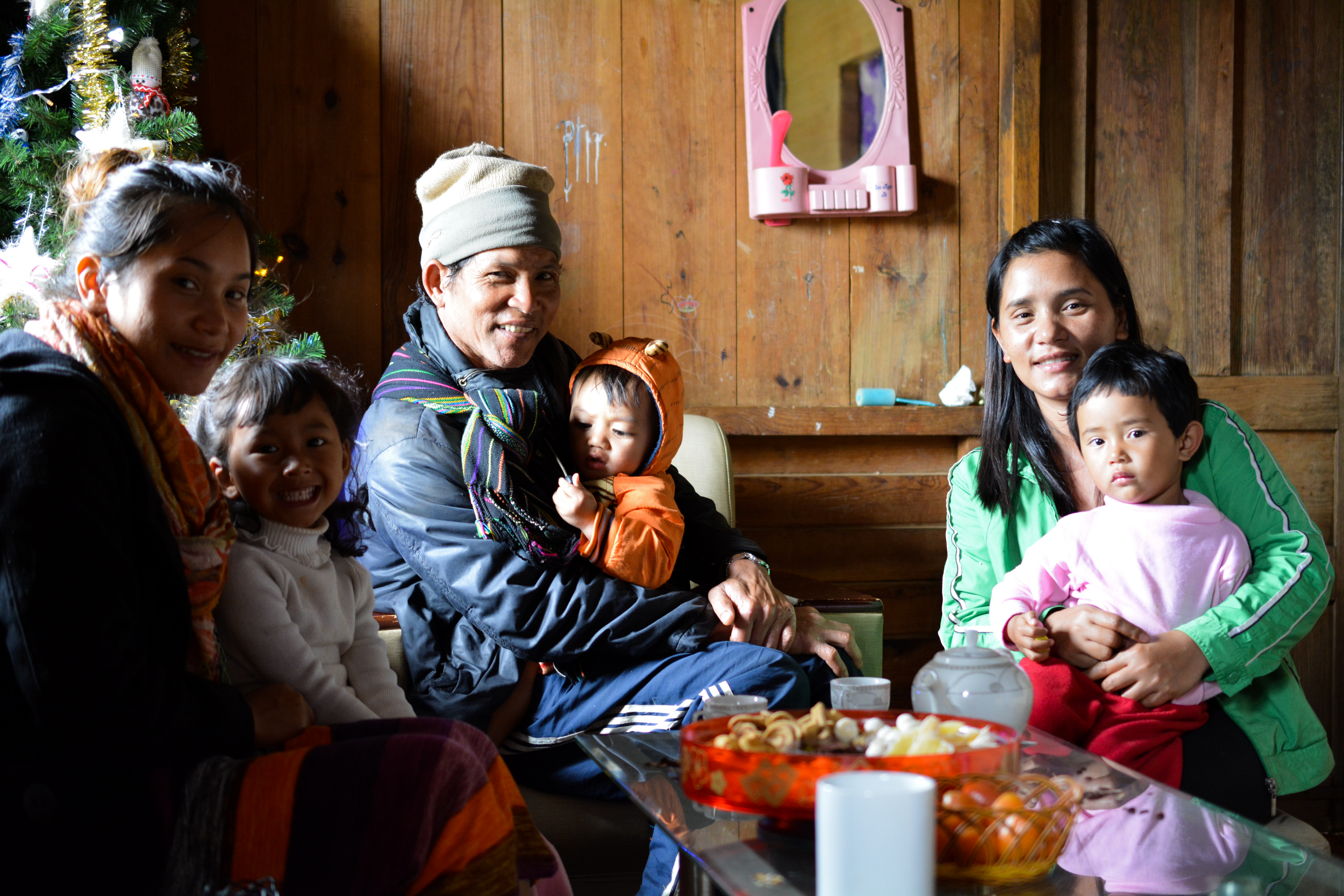 I was then introduced to Will Frith, a dedicated and knowledgable man when it comes to coffee in Vietnam! I unfortunetly didn’t have enough time to meet Will so we communicated via email, I had so much to ask as the specialty coffee production and exportation in Vietnam is difficult to grasp, due to it being a small developing market.

Will explains “In Vietnam, legally, a buyer can only approach a processor or exporter, as the production chain currently is heavily regulated and skewed toward the middle men. Some producers get around this by becoming a cooperative or by applying for an export license of their own. But each producer is essentially an independent researcher, which means they will make quite a few mistakes if they’re new to that side of the business. Doing international business on a small scale is relatively new concept, so it will take a few years and development to really refine a smooth process.”

To find out more about Will Frith and his dedication to the speciality coffee market in Vietnam visit his website at: http://www.willfrith.com/whatido/

Vietnam has a lot to offer despite the fact the Specialty coffee market is only just beginning here. It is encouraging to witness people as dedicated as the wonderful people I met during my trip who are working hard, and striving for quality in order to put Vietnam on the Specialty coffee map! I am very much looking forward to sampling coffees from Vietnam in the future in the UK.